Found nearly world-wide, skippers are more closely related to butterflies than to moths.   Skippers are stout-bodied insects with large eyes and clubbed antennae, which are usually equipped with a distinct “hook” at the end, called an apiculus.  Four subfamilies occur in Manitoba:  the Heteropterinae (skipperlings), the Hesperiinae (branded skippers, who will be featured in the next newsletter), the Eudaminae (dicot skippers) and the Pyrginae (spread-winged skippers), the latter two of which are discussed below.

Spread-winged skippers are generally brown, often with a series of clear spots near the fore-wing tips and/or with bands across the fore-wings.  Most males have a costal fold along the front edge of the fore-wings; it contains specialized scent scales used to attract females.  Most Pyrginae hold their wings flat when at rest or while nectaring.  Larvae, wich are small, green and slug-like, with large, dark heads, feed on a variety of plants.  Nearly all species have one generation per year.

In Manitoba, dicot skippers are represented by two species, the Silver-spotted Skipper and the Northern Cloudywing.  The caterpillars of both speices are legume feeders.

When basking or nectaring in a garden or local park, the Silver-spotted Skipper is easily noticed, even from a distance, because the free-form silver patch on the underside of the hind-wings, which gives this spread-wing its common name, almost glows.  The gold fore-wing bands on the dorsal surface are also a unique feature. 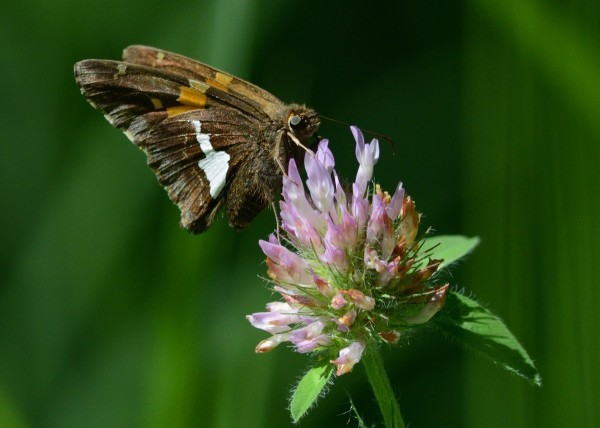 Above: A Silver-spotted Skipper nectaring on Red Clover (Trifolium pratense)

The only Cloudywing to reach Manitoba is the aptly named Northern Cloudywing, whose clear fore-wing spots stand out against the otherwise dark wings. These forest dwellers are common by early June and are easily found as they sip minerals from damp soil or as they nectar. 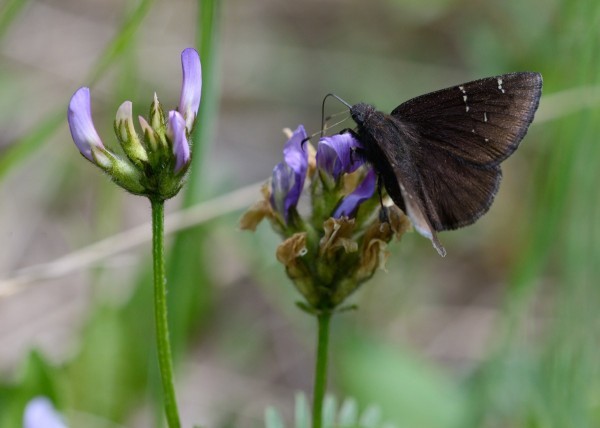 Above: A Northern Cloudywing observed nectaring along a forest road – near Pine Falls, 5 June, 2017

Duskywings (genus Erynnis) are small to medium-sized skippers that are brown above with bands across the fore-wings.  Members of the genus can be separated into two groups, one with white fore-wing spots, the other without.  Nearly all species are active in spring.

With greyish-blue bands across the fore-wings and no fore-wing spots, the Sleepy and Dreamy duskywings are nearly identical in appearance but differ in their choices of host plants - Sleepy Duskywing larvae feed on oak, while willows and poplars are host plants for Dreamy Duskywing.  Both of these species are more likely to be seen basking or puddling on a forest road than while nectaring, sometimes in close proximity. 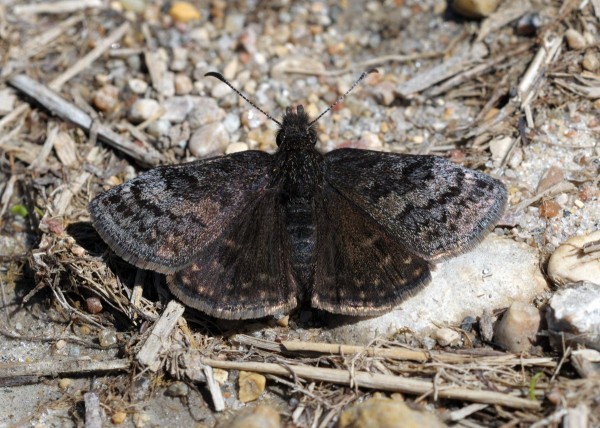 Of the “spotted” duskywings, Juvenal's Duskywing may be separated from the others in the group by its larger size and fore-wing spots, as well as by its stronger flight.  Oak is the larval food plant.  Also found in dry uplands is the Mottled Duskywing, whose wings are distinctively patterned in an almost checkerboard fashion.  Narrow-leaved New Jersey Tea (Ceanothus herbaceus) is the food plant of choice for this skittish species.  Finally, the Persius and Columbine Duskywings are most superficially alike and frequent forested areas where legumes and Wild Columbine (Aquilegia canadensis) grow.   Unlike the others in this group, the Columbine Duskywing is found in summer. 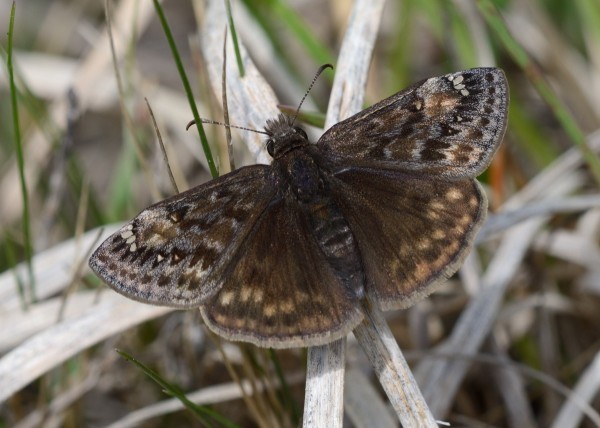 The following species belong to the genus Pyrgus.

The diminutive Northern Grizzled Skipper is grey with variably-sized white patches on the wing surfaces and heavily checkered fringes.  It is a rare treat to see one basking on a granite outcropping or nectaring at early spring flowers.  The Northern Grizzled Skipper occurs in larger numbers in odd-numbered years.  The larvae are reported to feed on cloudberry, and perhaps wild strawberry.

Our latest-flying spread-wing, the Common Checkered Skipper, prefers open areas and can be seen any time between spring and fall.  The male is a striking bluish grey with a myriad of white spots and squares; the female is darker overall.  The wing fringes are lightly checkered.  Unlike the former species, the Common Checkered Skipper has two or three generations per year; even so, not many individuals were recorded during our survey.  Various mallows provide larval nourishment. 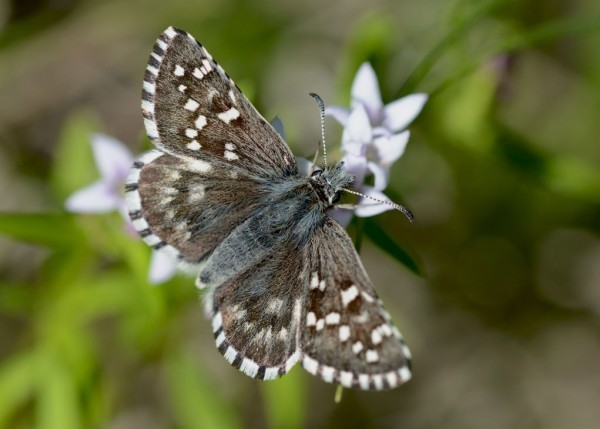 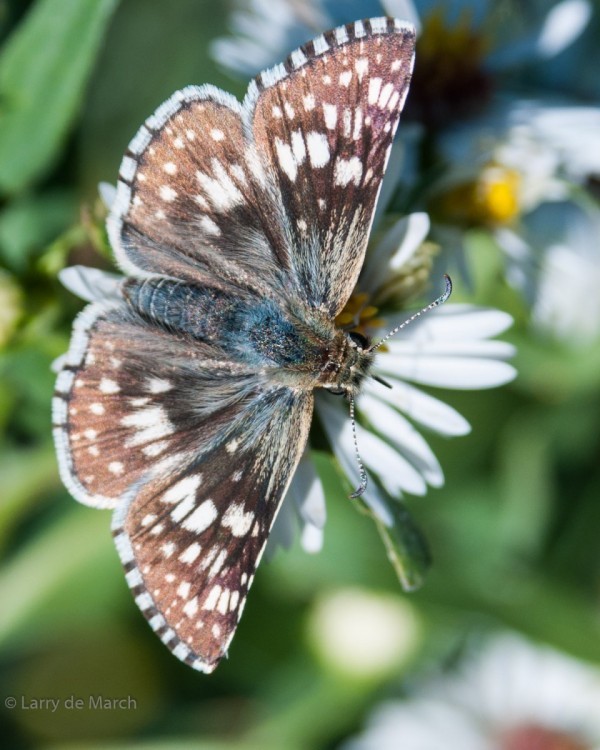