Above (Photo 1): Baltimore Checkersspot on a buttercup (by Richard Staniforth)

Between 2015 and 2019, we found seven species of checkerspots and crescents in southeast Manitoba. With the exception of the striking Baltimore Checkerspot (photo 1), the species look superficially quite similar to each other with their orange wings criss-crossed with black lines and patches. Their lower wing surfaces, however, are more distinct; the arrangement, numbers and shapes of silvery-white markings are clues to differentiating the species. As their name suggests most checkerspots have a checkerboard of markings on the lower surfaces of the hind wings (photo 2); whereas the crescents have a single moon-shaped silver crescent near the wing edge (photo 3). Checkerspots (photo 4) and crescents are attracted to nectar-rich flowers, but also have an affinity to animal dung and the carcasses of mammals.

Above (Photo 3): Northern Crescent showing the silver crescent beneath the hind wing (by Richard Staniforth)

Above (Photo 4): 4. Harris's Checkerspot basking in the sun (by Richard Staniforth)

Caterpillars of both checkerspots and crescents have rows of branched spines along their bodies and may live in colonial webs for protection when they are young. Caterpillars of crescents feed on the foliage of various species of asters whereas those of checkerspots also feed on sunflowers and Black-eyed Susans. The scarcity of the Baltimore Checkerspot in Manitoba may in part be related to the scarcity of the food plant of its caterpillar, the White Turtlehead, which itself is restricted to damp woodland edges.

Above (Photo 5): Male Northern Crescent nectar-feeding on a sunflower (by Richard Staniforth)

Sunny forest trails and flower-festooned roadsides are the habitats of the widespread Northern Crescent (photo 5) This is one of the most familiar and abundant butterflies in southeast Manitoba; we may count tens, or even hundreds, of them fluttering and gliding between the asters and wild sunflowers along a country roadside. This species has two close, but scarcer, relatives in Manitoba; the Tawny Crescent (photo 6) and the Pearl Crescent. (photo 7) 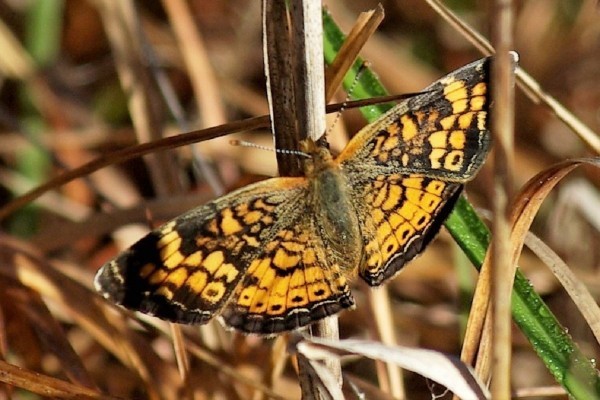 Above (Photo 7): Male Pearl Crescent warming in the sun (by Richard Staniforth)

Whereas males of all three species have wings that are primarily orange and marked by black lines and patches; they can be distinguished from each other by the degree of black markings.  In the more northern Tawny Crescent, the black markings are most extensive. The Northern Crescent has an open area of unmarked orange in the centre of each hind wing which is lacking from the hind wings of the rare Pearl Crescent. The females of these species are so similar to each other that their identification is best left to occasions when they are associated with the more identifiable males! Except for the Tawny Crescent, our species have two overlapping generations per year peaking in June and August. Butterflies may be seen as late as mid-September.